Being a geologist, it was important to me that our faith would be based on some kind of straight forward evidence or perhaps this just wasn’t going to work.

FINDING MY REASON TO BELIEVE 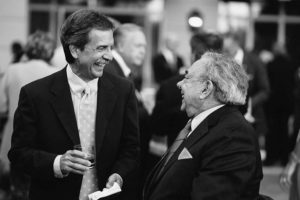 I became a Christian when I was about thirty years old, now over thirty years ago. We started attending a church that didn’t prioritize apologetics. As a geologist it was important to me that our faith would be based on some kind of straight forward evidence or perhaps this just wasn’t going to work. My conversion was a direct result of a fox-hole experience and now that the bullets stopped flying the question of proof, reasoning, critical thinking and evidence crept back into the equation.

A good friend of mine that reported to me back at the major oil company where we worked, a very intelligent Christian guy, suggested I do something relatively simple but certainly in hindsight exactly what the patient needed. He said “Tony, read everything you can by CS Lewis and RC Sproul.” Easy. Well, not so easy because with my brain power, then and more so now, I was able to comprehend only about 20% of what these brilliant men had to offer. That being said, I was very relieved to learn that our faith could be defended, could stand up to any scrutiny and was certainly something to wager not just this life on but much more importantly the life beyond. More than that, we are encouraged to make an argument and defend our faith when called upon. 1 Peter 3:15 … Always be prepared to give an answer to everyone who asks you to give the reason for the hope that you have. But do this with gentleness and respect …

RC Sproul and Ligonier Ministries played a critical role in my early Christian walk. I have said numerous times, except when visiting my friends at Ligonier, that I am a student (a reasonably poor one) of apologetics and epistemology. Nothing is more important than truth. In fact, from the outside looking in, it must be assumed that the pursuit of truth actually supersedes our faith. Put another way, the gospel message and the authenticity and inerrancy of scripture is tributary (yes, Spurgeon gently integrated with geology) to truth. Read Paul’s argument recorded in 1 Corinthians verse 19: If only for this life we have hope in Christ, we are of all people most to be pitied. If our faith ultimately is not true (if when you are dead you are dead – annihilated, poof gone) we are the sorriest, most mislead and deceived people in the world.

We say scripture can be defended from a historical and legal perspective. Eventually my plan is to write boiled down arguments to show that even from a scientific perspective there is nothing in scripture that conflicts with what we know, what we can observe, measure. Sorry guys (yes I grew up outside of New Yawk City, you girls are guys too) there is no conflict between science and scripture. I can see the body language. Let’s postpone that debate for now. Perhaps you are still wondering, Why Lehigh?

Notice the easy similarities, alliteration and location? Lehigh and Ligonier. A valley in eastern Pennsylvania vs. a valley in western Pennsylvania. But also notice the opposite locations, about as far as east is from the west in fact. My intent, especially considering I nearly flunked out of, ready? Lehigh University, will be to take a very different approach. Perhaps this could be described as a more casual, familiar, less complicated, more generalized, approach. The intent will always be to discuss the various elements or essence of OBC (Orthodox Biblical Christianity – Ridenour 1967). But reader understand that truth cannot be negotiated or compromised so the actual scriptural truth regardless of speaker, author or ministry can never be guilty of a contradiction. Our opinions may vary and yes there are some topics that will be debated until the Lord returns. Some are just difficult or difficult to accept: total depravity, pre-destination, the trinity, the problem of evil and suffering. Or perhaps something less threatening like the uncertainly of the timing of the rapture. So only the style, or approach or delivery will be different. To invoke a food-cuisine metaphor, same ingredients but one dinner is baked to perfection in 2 hours, the other, stir-fried in a wok for 6 minutes. Same ingredients. Different presentation. Different taste. I wield the wok. Hang on.

Our friends at Ligonier have always been brilliant in their approach. That is simply not an option for me. I have had, let’s just say more than one person, tell me after a bible study, presentation or encounter, that they now understood something in the bible that had always given them fits. I pray about everything but also, since I have a few less engaged brain cells than most, I can explain things (you see I have no choice) in a relatively simple straight forward way. Not looking for applause. Just a simple guy saying things is a simple way. Besides, we all suffer from data overload and an intensely busy day. This has essentially blocked our native ability to focus on the most important things. More on that some other time because that is a huge problem in our busy, stressed out and overwhelmed culture. Also, a generalist can usually find the critical path items easily. Our faith, in many ways extremely deep, complex and intellectually demanding, is in other ways actually quite simple. Children can easily understand the concept of someone else taking their own deserved punishment, paying for something that they owe, or simple forgiveness.

Didn’t mention this earlier. When I first started reading RC many years ago immersing myself especially in his book Reason to Believe, I remember saying that if I ever started a ministry (at the time a near zero chance) I would name it Lehigh Ministries to honor my friend at Ligonier in some very limited way. As most of you know, very recently RC went home and is now in the presence of our Lord. I was certainly looking forward to talking with him (and being teased by him – more on that later) about what I was doing and explaining the vision of the new ministry effort. But this conversation will have to wait until we are both on the other side of the river. So, today I start writing the story of Lehigh Ministries planning to build upon each experience for as long as possible to brighten and deepen the future narrative. I hope, perhaps better pray, you will join me.